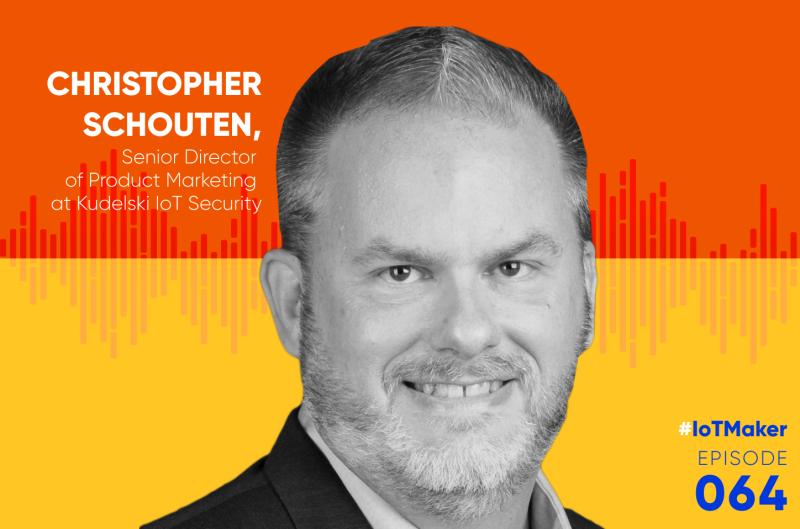 Originally published at IoT for All.

In this episode of the IoT For All Podcast, we talk IoT security with Christopher Schouten, Senior Director of Product Marketing for the Kudelski Group. We cover important security considerations for both new IoT deployments and how to plan for the long-term, some of the biggest challenges companies and IoT products face in terms of security, and some of the things driving the evolution of the IoT security space both this year and beyond.

Christopher Schouten has spent the last 18 years helping technology companies protect their devices, data, and high-value business models. Before joining Kudelski Group in 2013, Christopher held various marketing and operational management roles in pay-TV security as well as in mobile and fixed telecommunications in both the U.S. and in Europe. Christopher is a passionate early-adopter of IoT and smart home technologies and is based in Phoenix, Arizona.

To kick off the episode, Christopher shared what he sees as the biggest need on the IoT security front: expertise. He said that the customers Kudelski works with really fall into two major categories – companies that have a really good idea of what they need and just need someone with the experience to execute and companies that are earlier in the validation process who understand that they need to think about security, but aren’t really sure where to start.

While we understand that security is important, Christopher said that many people are afraid that when they look for help securing their device or deployment, that they’re going to be sold on a system that provides more than they need. “Not everyone needs Fort Knox,” Christopher said, they just need something that protects what needs to be protected and needs to be built to continue to suit their needs as the product scales.

Turning to some of the low-hanging fruit that many companies miss, Christopher said there are really three areas that he sees: companies will fail to use the existing security features embedded in the hardware they source, improperly store passwords and keys, or they just don’t consider the future of the product, how it scales and how it might be used down the line.

Security, Christopher shared, is a cat-and-mouse game with hackers. “You have to stay one step ahead and you have to keep your eye on the ball.” In the long-term, Christopher said that it’s important to change the mindset away from a focus on cyber and network security and encourage a bottom-up approach to device security.

To round out the end of the conversation, we asked Christopher what IoT security will look like as it evolves over the next year and what security challenges IoT companies will face. Specifically, Christopher anticipated an increased need for secure IoT in healthcare as well as a greater need for security as more people continue to work from home.

Interested in connecting with Christopher? Reach out to him on Linkedin!

About Kudelski Group: For IoT device manufacturers who need to protect their connected business and enable new business models, Kudelski Group is the only IoT security expert who makes IoT simple and secure – designing security in from the start and managing it throughout the entire lifecycle of your product.

Key Questions and Topics from this Episode:

(06:20) What are you seeing as the biggest need on the security front, when it comes to IoT?

(09:48) How do you approach designing security for IoT products – what are people overlooking, currently?

(11:54) Is there a common reason why companies overlook security issues or vulnerabilities early on?

(13:58) How would you describe the current state of IoT security?

(18:14) What are the biggest challenges to IoT security right now?

(21:54) What long-term considerations do you think are most important when thinking about IoT Security?

(23:32) What does a typical customer engagement look like for Kudelski?

(25:50) Could you share some of the typical use cases and how security plays a role?

(29:28) When it comes to things like insurance, what role does IoT security play?

(32:16) How do you see things evolving in the next year in the IoT security space?

(34:01) Anything we should be keeping our eye on over at Kudelski?